With Dr. Vidhya, my Ambikuttan Athan’s grand daughter, who was with us in Baltimore for a short holiday.

When she called me for eating, once, twice, thrice, my thoughts flew back beyond oceans, beyond several decades to our Olavakkode house, when as a kid, I was fed by her grand pa, pleading, begging, ‘muthanna, chappiduda—-‘,

No, I refused to eat. He didn’t scold me, slap me or threaten , ‘ummachi kannai kuthum’.

I repeated my arrogant behavior when, during a college vacation, I bicycled my way to Puducode, to meet him. After spending a night, when I was about to return, he gave me a new veshti. I refused. He pleaded,’don’t wear the same cloth you had last night’ . He begged me to accept a veshti, a new one , with fresh smell from the Mill.  No, I didn’t heed.  My wrong conviction that I shouldn’t accept any gift from anyone, even from a very close relative made me blind, made my heart granite like. Or was it the unlimited arrogance of a college student?

Many decades passed through, in between like the scenes we see from a moving railway compartment.

The T shirt I was wearing while clicking this picture was gifted by my eldest nephew which I collected and wore proudly and told everyone here that it was a gift from Suresh. Today being his wedding anniversary, I wanted him me wearing his gift and tried to contact him through FaceTime

A millionth of the present common sense and courtesy, had I possessed, decades ago, I wouldn’t have hurt and damaged irreparably, a most affectionate, kind heart ! 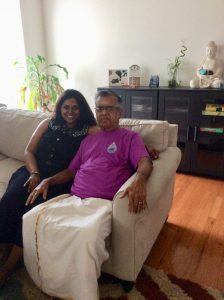 Category: A12.01 About me, my family & friends
Leave a Reply Cancel reply
Categories
Comments