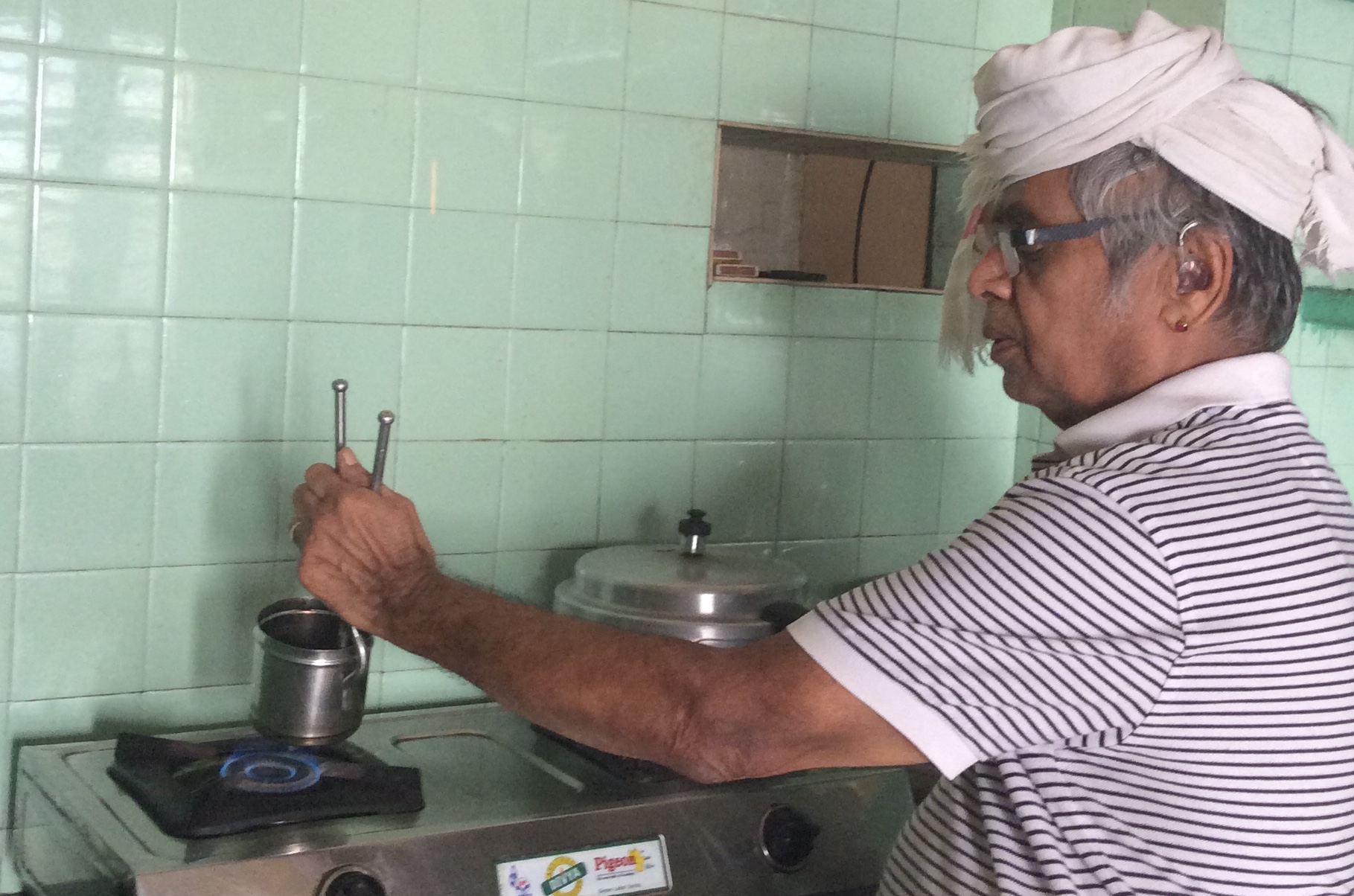 At times my brain works at abnormally high speed.
A recent example.
Time 3.30 pm. Vicha ‘s electronic clock woke him from his post-lunch nap, for a purpose.

‘Shall I make kaappi?’ He turns restless.

I rushed into the kitchen. To make coffee you need just two things, decoction and milk. No sugar for thammudu. Where is milk? In the fridge. Very good.

Where is decoction? Filter empty. No problem. Srikanth has neatly labeled the dabbas. Picked up coffee -power dabba.

The holes of the upper mini drum were all blocked. No problem. Let me clear the blocks with a needle. Where is the needle ! Searched everywhere. Not found.
(There is a box full of insulin syringes with thin needles, but my brain, had gone for a Kerala hartal)

A flash inside. Brain wakes up like undesirable desires rising at my heart at times. Bad comparison. It is ok. Bad also is a part of life. Black makes white whiter. White is often forgotten; black stay longer. All the luxurious parties in star hotels forgotten; only #MeToo stays.

There is a solution for every problem. I switch on the stove and holding the percolator carefully with tongs, heat the bottom so as to burn the coffee granules stuck in the holes. The holes are meant for free flow. All holes.

The idea is not mine. Yes, it was Perinkulam Anantha
Iyer’s practice. Great man he was. The son follows the father’s footsteps. A proud father, he would have been excited had he watched my action.

The bottom of the percolator turns black. Doesn’t matter. It can be washed off. Some blacks can be cleared, not all. Some stains are immortal. Man goes, stains stay back.
But wait. Let the heated percolator be on the platform. Let me get milk from the fridge.
‘Don’t heat the milk now; let the decoction be ready’, advises the brain.

Very good, opened the coffee powder dubba, removed the powder and just lifted the percolator with two fingers. It was still red -hot! I forgot. It didn’t .

Ohoooooooooo! Two fingers got burnt! Ohooooooooo.
Rushed towards the tap to pour water on the fingers. Oooooo, pooooo!

Vicha sitting in the hall didn’t hear my screaming from the kitchen. He wouldn’t have heard even if I had screamed at his ears!

‘Unduraa. I will blast your head.’, I screamed. No problem. He wouldn’t heard that too. Disability is a blessings, at times- for others!

‘How difficult is the job of a house wife!’ I thought and praised mentally the woman who silently served coffee, 3/4 times daily, just for asking and even without asking for the whole family, friends and frequent visitors, for many years. She would have been appreciating seated on mango tree branch, somewhere. I would have said coconut tree beach, but that tree is too high for her. I don’t want to trouble her. Have troubled her enough before.

I praised my intelligence too.
‘Had I not used the tongs and directly held the filter in my hand and heated?’ Not two fingers, the whole hand would have been burnt. I was indeed a wise man.

P.A.Iyer, be proud of your son. He I didn’t blame his Fate or the star on the sky on the day of his birth for the mistake he committed.

The burnt fingers continued to blame my foolishness- ‘you have no sense’, I passed on the blame to my brain.

‘If I’m senseless why did you scream, when you got burnt? ‘ asked the brain.

Oh my god! The milk has boiled and boiled and boiled, overflown on the burner, putting off the flame, leaving the base of the vessel charred. I was standing almost touching it but didn’t notice the overflow of its anger. Not surprising- I was standing, not close, but touching a woman, but failed to see her overflowing anger. Anyway that was when I was younger. When you are young, you fail to see the face of your wife, see only her back and when the time comes to see her front, you see only her back, that too from a distance. No problem, I see her face from the wall opposite to me.

‘Anna—-‘ Thammudu reminds again. What to do now? No milk in stock. Shall I go out and buy a packet from the shop on the circle road? Poor Vicha is going dry with no kaappi which keels him alive, though limping.

At that critical moment, the embodiment of immense mercy,
Saraswathy Devi, who had abandoned me for the past two months, inspires my mind and I sing aloud, for the first time in the last two months, a popular Kathakali padam, loudly:

Viswanatha Iyer, heard the third repetition and responded, skipping the next few lines, and sang, in high pitch. That is how that padam has to be sung.

He wanted to convey that he too, was like Sudhama, waiting long, not to meet Lord Krishna, but for his favorite kaappi