Human, animals, birds, fish, insects – all migrate, for various reasons.
My first migration was on the shoulders of my father, when I was a baby of six months.
By walk or bullock cart drive, he lifted me from Perinkulam to PAlakkAd,. My second
Migration was around December 15th, in the year 1959, when I left for Hyderabad, to report for duty at NIN, on the wind -up of our Trichur Unit, where I had joined a WHO project, some six months earlier. Our Institute, till then, part of the Pasteur Institute building, Conoor, was to have its own building, a much bigger set up, in a 36 acres of land, in the Osmania University premises. That was 55 years ago, when I was 23 years old .
Earlier to that, I had never travelled beyond Madras, the present Chennai. None in our family visualized then, that my migration to Hyderabad was another landmark as that of my father’s, heralding a series of such transplantations later. 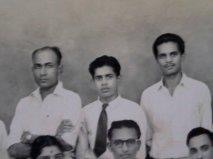