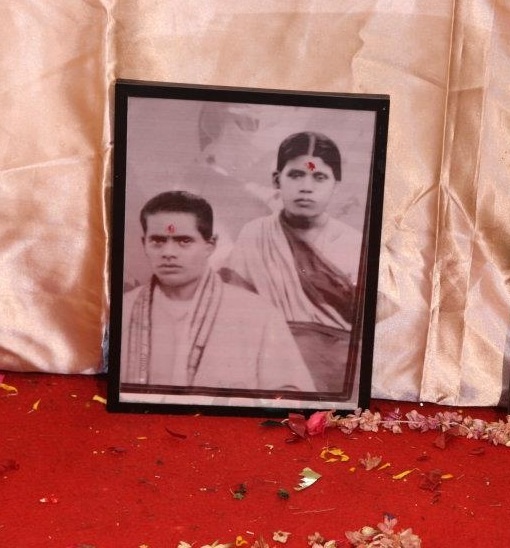 ” Vrichika mAsam, Hastham- that is on 19th November- your birthday,” reminds my younger brother from Hyderabad. I have two more birthdays- Official, October 15 th, stamped on all my records and December 7th written by Mookkunni astrologer, in his own hand in a pocket note book, where he had mentioned the star and the position of planets at the time of my birth. I was born only once but has three birthdays! Similarly, I retired from service only once but had four farewell parties!
Really interesting!
So, there is no doubt that I was born. There are written records to prove. Written records are more important than physical existence.. Last week, I obtained a letter from a Notary certifying my existence, which I sent to my office for releasing my pension payment. Even if I had presented myself personally before my office , spending airfare, my pension amount would not have been released, in the absence of someone certifying that I’m alive!
My birth was not a big event. No sandalwood smell scented the breeze in my village or anywhere in the world to celebrate the event. Nor did the Chand, Moon shine with additional charisma. But, in my mother’s mind did rise a new full moon with unique glory, unseen till then. In the life of my father and other elders, did suddenly flow a cool breeze soaked in the waters of the Ganges flavored by the herbal flowers of the Himalayan valleys.
But again, what is big about it? Any other parents would have felt the same way as my parents did. There was, indeed a difference . My birth was a sooryodayam, Sunrise, for the family sunk in despair following a disastrous tsunami of misfortune, which spared my father, spared my mother too, after extracting her one eye but mercilessly carried away their first child, my elder brother, hardly one year old, through its demon messenger, called small pox.
A male baby was born, all parts in tact. They were at the zenith of happiness. As per the practice of those days, neighbors were distributed a measure of paddy and a small coin to announce the arrival of the new asset to the family. Someone whispered to my grand mother’s ears, ” Ammalu, Atham atchane kollum- the Hastha nakshatram, my birth star was harmful to my father”. There was no need to remind the eldest member of the family the belief that my star was inauspicious for my father and that was not the occasion, but she did it.
My grand mother already was aware of that. In fact, the moment my mother’s labour pain started, she was praying to every god known to her, that the baby should not be born in the cursed Hastham star. By nature, she was a bold lady, who withstood the onslaught of calamities in the family, one after the other, like a stone wall, but the fact that her husband passed away within a short period after my father was born, shook her mental balance.
And my mother- the woman, who lived the life of a hermit after she knew that she was pregnant, was also shaken. Did she, after all the sacrifices, deliver a devil, who would suck her husband’s life?
My father stood unshaken. Death was not a stranger for him, after he saw his father’s and then brother’s death, during his very young age.
He came out of the house and assembled his friends and organized a betel leaf session.
“Onnu Murukkam” let us enjoy a betel leaf chew”, he said and placed his casket
full of fresh betel leaves, areca nut seeds also fresh from the tree in the backyard and Guntur tobacco leaves, specially imported from Andhra.
Unaware of all those TamAsha, wrapped in my mother’s cotton wears , I was enjoying the fresh smell of the soil carried by the cool winds from the Western Ghats, passing through the Kalpathy River sanctified by the sounds of the small brass bells and conch from the Shiva Temple.
I dedicate this memoir to my mother who suffered for me even while carrying me in her womb, praying and starving on many auspicious days, undergoing unexplainable anxious moments, before and after my birth and also to that semi educated, smart, handsome man of great dedication and will power who taught me the primary lessons of leading a good life, decently, helpfully, smilingly, equally enjoying the heat and cold, day and night.
———————————–
Comments:
That is a nice depiction.
Very descriptive, poetic as well.
The last para is really touching. Akin to Adi Sankara’s Mathru Panchakam.
Thanks for sharing.
Incidentally I am 77 today (DOB 20.11.1937) Aardra star.
Regards.
R.Lakshminarayanan.