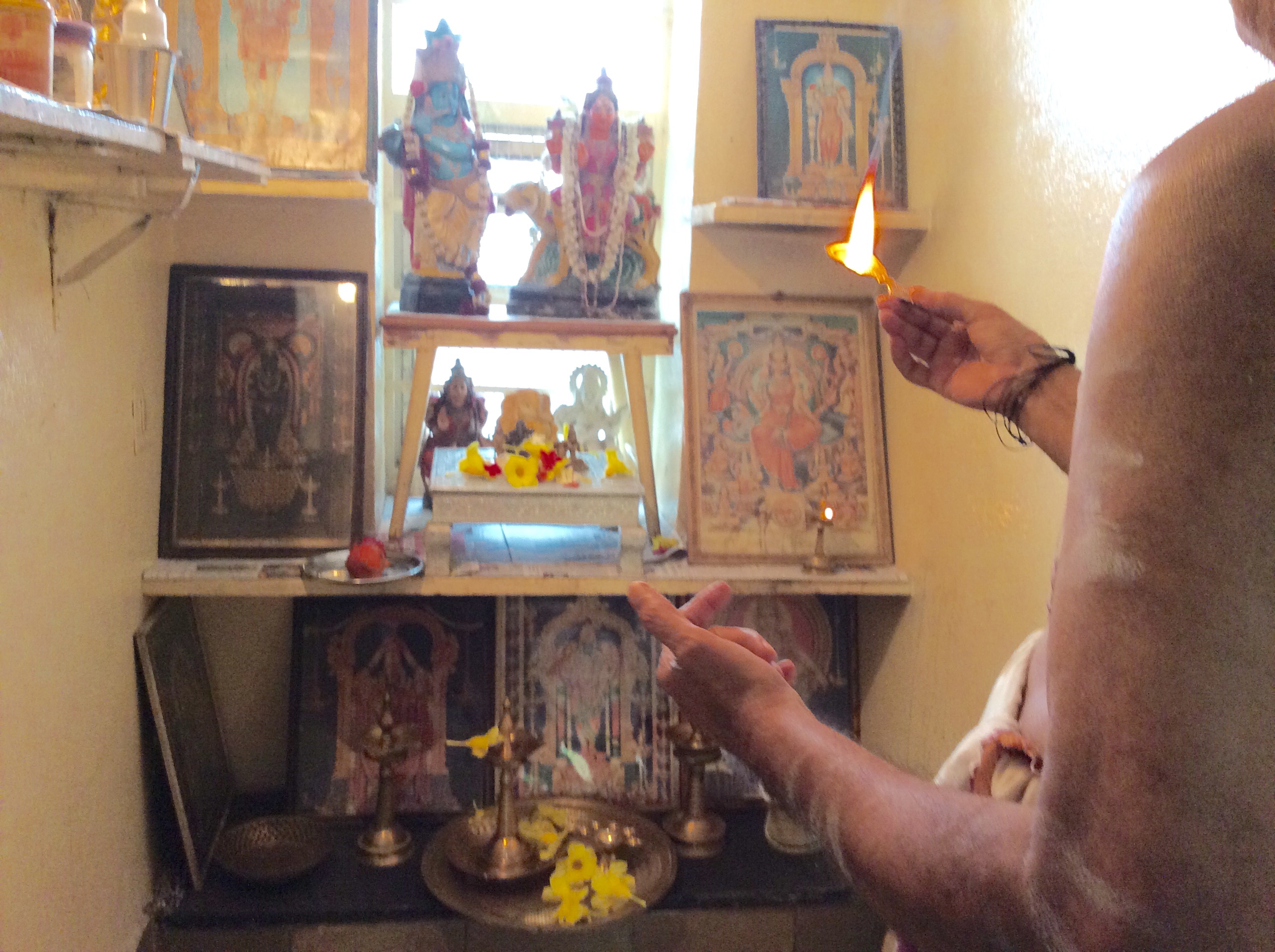 My pooja room is an integral part of the springs and winters of
my life. I have seen its golden as well as its dark days. My Moorthis dwelling in that tiny room reflected my waxing and waning!

For my Appa of usually advanced thinking, there were a few conservative ideas such as Sakunam, to which he struck religiously. The braking coconut exactly into two haves for the Vishukani was an indication for him that things would move smooth for the ensuing year.

After placing a handful of Bilwa leaves which my Mohanasister had brought, on the idol of Mahadeva in my almost abandoned home shrine and seeing the coconut breaking into identical halves, I felt that the Moorthis in my shrine have pardoned me for neglecting them for months and years and were assuring me an easy walk through.

After all, this small abode was once a center of serious spiritual activities. Melodious metal bell sound could be heard in the mornings and at times in the evenings too, from this holy place, following my rhythmic recitation of Vedic humans. The early morning Sun rays used to reverently reach, through the big ventilators on the front wall, to tough the feet of the Moorthis here. The big brass lamps, in rows, used to shine with multiple wicks on special occasions and on other days one or two moderate lamps but always spreading brightness.

My children used to get up from their cradles hearing my Rudrajapam or other hymns and their cries never hampered the flow of the recitation of my Stotrams nor the sound of my singing stopped their cries. Absolute symphony was there in the main living hall which expanded to this small shrine.
Though my children may not now remember a single line from my recitation, the essence of our culture, though not the rituals, got embedded into their system. That was a big victory for me. They became spiritual in the real sense and live a honest life without the interpolations or interference of religious restrictions and regulations. They mean what they say. They say what they feel. They are free birds now but their wings derived velocity from my Vedic hymns. I believe so; they may not.

All those became old stories when an year-long tempest lambasted my family in 1999 and blew off its roof in the early days of the current Millenium. The year 2000 started with a thunderous thrash. The lady of the house left us for ever. Atchuth was 16 and Srikanth 14, then.

Then on, for many days a solitary lamp silently glowed with no accompaniment of hymns or metallic sounds, inside my pooja room. I had abandoned all routine religious activities.

The house did wake up again in joy with the preparations for the weddings of my eldest son and daughter, which took place in August 2001.

The arrival of Meghana and Vuday changed the whole scenario of dullness into delightful vibrations and their cheerful parents and other relatives wiped off every tinge of black ink from our lives. No going back since then. God opened two big doors after closing the main door.

During my absence of four years Vicha Anna did what he could best.

My Moorthies stand by me and tolerate everything I do and that is their keerthi.

I can’t close this write up without sharing with you some light- weight stuff.

‘Neivedyam’, me from the pooja room, turning head towards the kitchen.

‘See to your right’. Response from inside

After some time, ‘karpooram’. My demand.

‘See to your left’

‘Surprising! What do you see then?’

‘Enough of your worship. Get up and rock the cradle’

Not always, occasionally, did such dialogue took place between us.

Pooja is for what after all?

You know the answer.