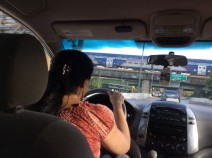 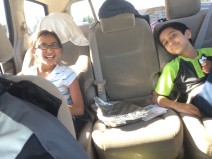 Thoroughly enjoyed the thanksgiving week end . Two birthday parties, a Thanksgiving party and a surprise Baby shower.
And all because of a narrow escape from a car accident which could have been disastrous, but for the God’s blessings.
A story on that.
We were almost at the destination; the vehicle was slowing down.
‘SP!’ There was a call from the top, I knew who called but didn’t respond.
‘Muni!’ – He called again. Again, I kept silence.
‘Mahamuni!’ That was almost an order to respond.
‘Yes dude.’ I answered casually.
‘Dude! Ha, ha! I’m indeed your dude!’
There was no sarcasm in that response.
‘What else to call you boss, for the tsunami you created in our life this year ? Anyway, I have pushed 2015 to the gate.’
‘You pushed it?’
‘Then who else, you did it, dude?’
After giving the signal to turn right, our car was slowly moving to the car path of the house of our destination, when another car crossed ours in high speed from the right side but we had a narrow escape . The speed with which that vehicle passed through was so high that our car would have been blown high and to pieces, had it hit us. I turned to the back seat where the two kids were still playing and stood speechless for a minute. That usual ‘ente Guruvayoorappa’ distress call too didn’t come out from my lips.
After sometime, regaining my calm I looked up and told my ‘dude’, ‘yes, you pushed the car which intruded when our car was entering the destination so fast to save us from a disaster.
Yes, boss, you pushed 2015 to the gate. You push me, you push the earth and planets to move. You push the Time!
And the ‘Kalaithookki nintru aadum Deivam, my ‘dude’ pushed me to dance in my grand daughter’s birthday party!

Category: A12.01 About me, my family & friends
Leave a Reply Cancel reply
Categories
Comments