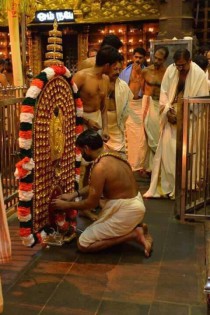 I’m a pensioner and unless I submit a notarized certificate to my office , before the end of this moth, my pension amount won’t be credited to my account.
It is not because that I’m away from my office where I worked. Even if I go personally and stand before the concerned officer, who worked under me and tell her that I’m so and so, she won’t release my cheque.
She will say, ‘yes Sir, I know you ( means, how can I forget your ill -treatment?), but I need your life certificate to release your pension.
So, life is not important, a certificate to say that I’m alive is important. The person who certifies had never met me, belongs to a different country and only after his certification, I’m alive for my office, for all practical purposes!
Ithu Eami thamaasa, thammudu? What joke is this, brother?
Going by that analogy, I can say with near accuracy that I was not born at all, as I don’t have a certificate to say that I had born. For obtaining a Green Card for me, my children wanted my birth certificate and the SSLC document where some date has been mentioned, was not acceptable to the authorities here.
I went to Palakkad Municipal office, paid the prescribed fees, waited, the clerks searched the past 80 years’ records( wonder how the rats and rodents have still left them untouched!) and no were there was a certificate copy of my birth. How will it be there, when it was never made? How will it be there when my birth was not intimated to the Municipal Office? Birth certificate was not a ‘prasnam'( issue )at all for my father and other parents too, in the olden days.
Now comes the climax! As I was not born, I need not die, as someone, somewhere has said,
“jatasya hi dhruvo mrityur
dhruvam janma mrtasya ca
tasmad apariharye ’rthe
na tvam socitum arhasi
“One who has taken his birth is sure to die, and after death one is sure to take birth again. Therefore, in the unavoidable discharge of your duty, you should not lament.”
‘It is not someone, somewhere, Thatha,’ corrects my grandson,’it was Lord Krishna, who said so, to Arjuna, in the Githa’
Now, I’m all the more happy. Krishna, unlike me, never tells lies.
And His words never go waste. I need not die at all!
Krishna is a clever guy. You can dupe anyone in the world but not Him.
He taps at my back, looks into my eyes and smiles, saying nothing.
‘What’s up, KRISH?’, I ask Him, raising my head.
‘You, Sathyam, Shivam! You have three dates of birth, not one, remember’
I rub my eyes to grasp what He said, thinking it was a dream. It wasn’t. Krishna was standing before me! In His hands were my horoscope, SSLC book and a Pampu, snake Panchangam.
Perinkulam jyotsyar Mukundan Unnikannan Tirumulpad, whom my father, authoritatively and affectionately addressed as , ‘Mookkunni'( meaning, a small bump on the nose – that was how beautiful names were shortened and tampered in the villages), on my father’s request had made a Janmapatrika, birth record. Amidst ample Samskritham and Malayalam words, he had indicated therein, the corresponding English date of my birth too, in a corner.
But that was not the date recorded in my SSLC book!
While admitting me in the first class ( no L or U Kgs then), my father would have told some date to Govindankutty master, without referring to Mookkunni Manifesto and the teacher would have written some date depending on his mood then. If it were a priest in the temple, ready for doing Archana in my name, Appa would have correctly said, ‘Hastha Nakshatram, Kanya rasi’ but school admission was not a ‘prasnam’ or issue at all those days.
Then, there is a third date of birth for me and that was why Krishnaji had a brought with Him a Pampu Panchankam. To show me the English date, corresponding to my birth star, in Vrichika masam, the month of my birth.
‘So, with three dates of birth to your credit, how do you claim permanent residency in this world?,’ asked Krishna.
‘Don’t be childish, Krishna!’ I taunted Him. ‘How can anyone have three dates of birth? Even you can’t have that. You have 1000 and odd names, 16000 and odd wives but only one date of birth’
‘What is that date?’ He asked me, realizing that He was caught on the wrong foot.