Picture index:
1. Perinkulam 2.Navaneetha Krishnaswamy Temple.
3. Navaneetha Krishnan 4. Shivan Kovil on the bank of the pond and 5. Padingarae gramam- the VaradarAjaswamy a Temple is at the end of the village. 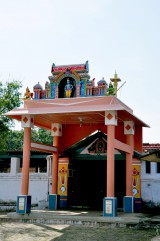 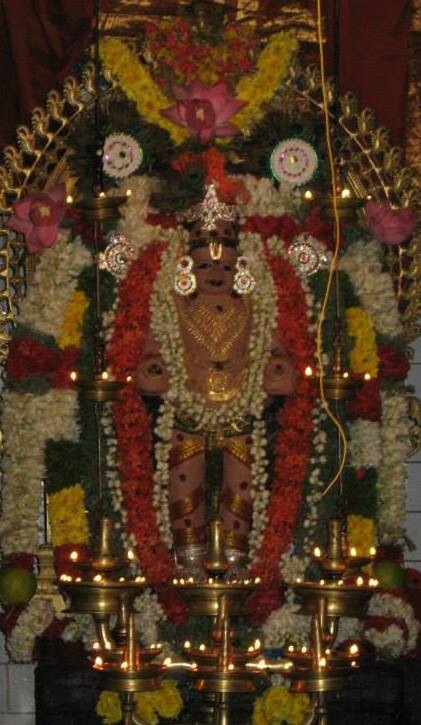 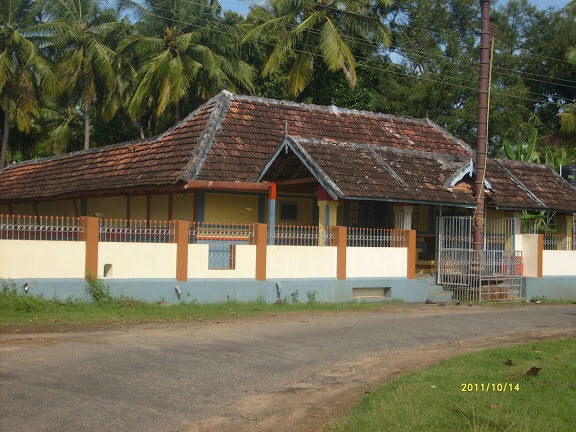 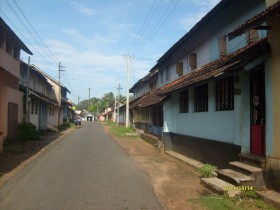 Every old Hindu temple in Kerala has a pond in its premises, unless the temple is situated on a seashore or on the bank of a river. Similarly, every Brahmin Agraharam in Kerala, invariably, has at least one temple and a pond, unless the dwelling conglomeration, like Kalpathi, is on the bank of a river .
Perinkulam, about 25 km away from the Palakkad town, in a lovely landscape under the hill Vizhumalai, is one of the few Agraharams bearing the name of a pond there in. The pond, Perinkulam, meaning big pond or Brihat tatAkam in Samskritham, is in between two of the three branches of the village, namely Thekkey gramam and Padinjare gramam, southern and western parts, a Shiva temple adorning its bank.
The Padinjare gramam extends to Kariot village and these two villages are sanctified by two temples, one for Bhoo Devi sametha Sri Varadarajaswamy and the other for the Divine consort Mahalakshmi.
The Brahmin migrants from Tanjore, some 800 years ago, reached Perinkulam in two groups, one direct and the other after visiting Tirupati. The first group settled with the help of the local land lords and after a few years, the second group too joined, completing their Tirupati pilgrimage . The Tirupati group brought idols of Lord Venkateswara ( which they were worshipping as Varadarajan Swamy ) along with Mahalakshmy and these two idols, were installed facing East, in a shrine constructed on the western side of Perinkulam. This shrine is located in the center of the three villages.
Subsequently, due to some petty quarrel, some people left, and formed an extension for the Padinjare gramam, carried the idol of Mahalakshmi and installed in a separate shrine in the extended village called Kariot gramam.
On the southern bank of Perinkulam is the Thekkae gramam with a temple at the extreme end. Navaneetha Krishnaswamy is the presiding deity of this temple. The Moorthy, the idol, was brought from a Nambudiri illam called Varikkasseri mana, through a divine disposition.
Since 1958 all the three villages collectively conduct the Chariot festivals in Feb- March, the Ratharohanam being performed on the Masi pournami , as a 9- days long festival. The annual festival gathers Perinkulams settled elsewhere and at least once a year, we visit our ancestors’ land and worship our village deities. The non Brahmin community too gather in large numbers and make the festival a success. In fact, they were always a part of the society, though unlike now, they lived in the outskirts.
Opposite to Krishnaswamy temple, there lived a Pakku mama, whom I had met. His great grandfather, Bhaskar pattar also known as Soori, got the Chooriappan kulam dug, about a km away and on its bank, constructed a small shrine to install the Shiva Lingam and the idol of Visalakshi AmbAl.. He had brought the idols, on his return trip from Kasi. This shrine was later shifted to the present location on bank of Perinkulam pond for better proximity and safety. How much trouble he would have endured to bring the idols from the distant Kasi, carrying them on his head or shoulders, although his long walk , and also to dig a big pond and construct a shrine for them! An icon of dedication, devotion and determination.
Ponds and temples were the head and heart of the Brahmin society in the old days. Water was their basic need not only for consumption and bathing but for their daily religious rituals, which were as important as the ingredients for their survival . The Temple was their spiritual center and a common place for social meet. It was their club, kalyanamantapam and Vedam and music college. The elders of the society used to conduct meetings under the flag post of the temple, to discuss their problems or settle their disputes.
Brahmins were prepared to forgo food for day or two but not their Sandhya worship and temple visit. Even the womenfolk, busy with their household work, used to extend the neck towards the shrine and worship for a minute, hearing the sound of temple bells.
Apart from these three temples, there is a Ayyappa shrine, behind the Shiva temple, which came up over four decades ago and a few Mariamman temples too, in different locations.
(To conclude)

Category: A12-- Everything under the Sun

3 thoughts on “perinkulam- a pond, a village and a memoir part 1”