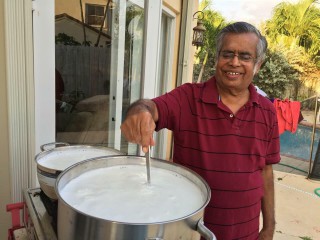 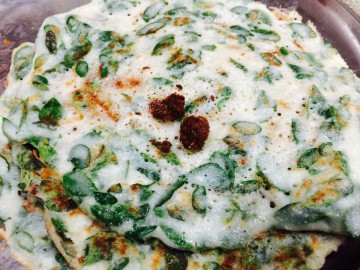 My grand niece Gayathri cooked Muringai elai adai and while enjoying it along with veppelai katti, the good lady remembered me and sent a picture of the snack with a tag, ‘missed you, Athan’.
I expected her to ‘miss’ me, while boiling milk, every time!
While I was at her house recently to participate in a Rudrajapam, I volunteered to do any work and unable to tolerate my nuisance, I was asked to ‘keep a watch’ on the milk being cooked on two vessels on the stove, side by side. After a few minutes, one of the guests came in and seeing me standing like a stick and not stirring the liquid, starred at me, removed one of the vessels from the stove, which was slowly getting charred at the bottom of the vessel.
“The milk didn’t boil,” I volunteered to show that I did my job perfectly and if the vessel got charred, it was not my mistake.
“Ilakkanam!”- you had to stir it-a strong but short admonition( considering my age).
Instantly, I started stirring the liquid in the second vessel on the stove while the ‘ilakkanam’ instructor was busy transferring the milk from the first vessel to another one. Suddenly, with no warning, the milk under my control bubbled and while I was searching for the ‘off’ button, it overflowed on the stove with a ‘keetch’ sound.
‘Palu, palu,’ I yelled and the ‘ilakkanam’ instructor turned at me and stared as if I had meddled with his Panchagatcham. He had come ready on his traditional dress for the worship.
Having known that he is a Pediatrician, I volunteered, ‘my nephew too is a Pediatrician’. That statement was absolutely unnecessary there. But that was just my effort to cool him down and gain his friendship. But instead of saying, ‘then, it is ok’, he simply said, ‘I see’.
While I was searching for paper napkin to remove the milk spilled on the stove table and clean it, my grand niece entered in and consoled me, ‘it is ok, Athan’.
‘It is not Ok,” I expected the ‘ilakkanam’ to say, while she was clearing the mess. But he didn’t. My ‘pediatrician’ dose had obviously worked.
But, I didn’t want to look small before my grand niece. I pulled out my iPad and showed her the picture, she had clicked on the previous evening, of my boiling the milk with great success.
This was what happened then. Her husband was boiling milk on a gas stove outside while I was strolling nearby enjoying his garden and swimming pool. Someone called him from inside and he rushed handing over me the ladle with a request, ‘ please keep a watch’. After two minutes, he retuned and wanted to take over but I refused.
‘Don’t worry,’ I told him. ‘ I’m an expert in boiling milk’
Apparently, he didn’t believe my words, seeing the angle in which I was holding the ladle in my hand, but he didn’t want to insist on my parting with it and hurt my feelings. Therefore, he went inside, keeping a close watch at me through the glass partition door, so that he could jump in and save the milk, in case it was about to overflow. His wife, enjoyed the scene and clicked a picture of my taking care of the milk.
Had she not seen my doing the job perfectly on the previous evening, she wouldn’t have entrusted next day, the job.
But the culprit was the electrical stove, whose on off press buttons were on the top and I couldn’t differentiate between those. In a split second, the milk started bubbling, I got confused. The gas stove outside had on- off knobs and I’m an expert in handling those.
Many times I don’t get opportunities to exhibit my skills, but when those come, something or other happens and stops my success. As Ammalu says, Suthippodabam!- the effect of evil eyes has to be removed!
Or, the Stars don’t want me to come up?