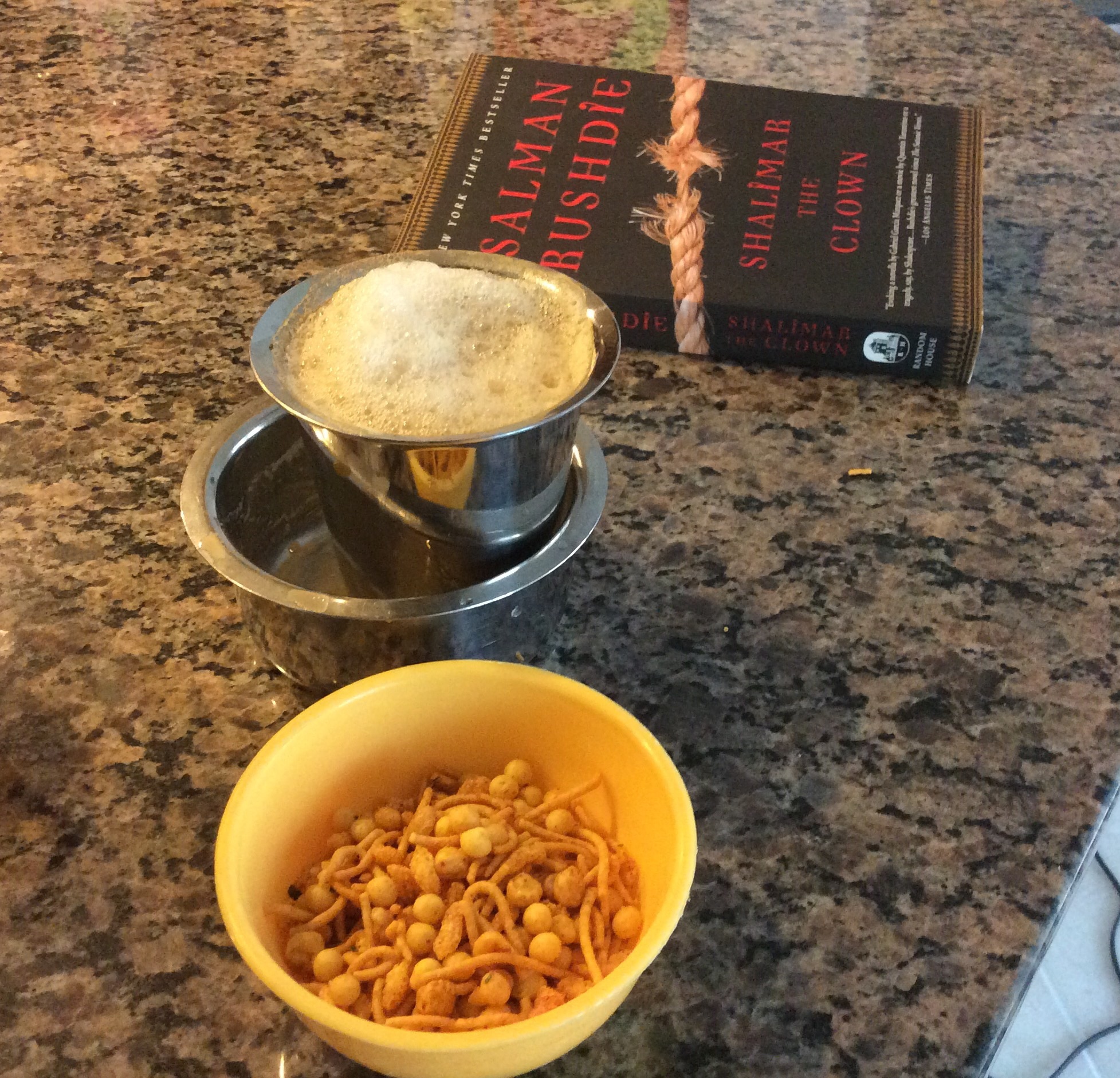 For a sub zero weather, hot, hot coffee, oru khaara, , oru pustakam gifted by maruman. Dr. Keshav. Last time when I wrote his name as Keshavan, he quarreled, “mama, onakku en Peru sariyA solla varathu?”
I replied, ” you are a Vaishnavan. Your grand father would have prescribed your name and called you KESAVAN, his heart ebbing with pride and enshrined with the form of the Lord with rich, flowing hairs, hands prominently carrying four divine weapons. He would have also murmured, ‘Keshava: Purushothama:” and your grand ma would have added a pasuram, where your name appears:
“வங்கக் கடல் கடைந்த மாதவனை கேசவனை
திங்கள் திருமுகத்து சேய் இழையார் சென்று இறைஞ்சி
அங்கப் பறை கொண்ட ஆற்றை அணி புதுவைப்
பைங்கமலத் தண் தெரியல் பட்டர் பிரான் கோதை-
சொன்ன சங்கத் தமிழ் மாலை முப்பதும் தப்பாமே
இங்கு இப்பரிசுரைப்பார் ஈரிரண்டு மால் வரை தோள்
செங்கண் திருமுகத்துச் செல்வத் திருமாலால்
எங்கும் திருவருள் பெற்று இன்புறுவர் எம்பாவாய்”
I raised my head anxious to see his facial expression.
He had left the scene, long ago!
In the olden days, we used to consult our parents before naming our babies, born after the fourth, up to whom the names were already predetermined.
They used to come out with such old- fashioned names like Paravathy, Parameswaran,subramanian etc,
Their intention was, while calling the kids, we would actually, though unintentionally, remember the Gods and goddesses. But, in practice, names got polluted to PAru, Pammetchu, Chuppani etc.
The present day children know that the original names never remains as such . Wise guys, they don’t ask our opinion at all. They choose their own sweet, short, simple, mobile- fitting, metallic names.
Easy to pronounce.
Imagine the confusion in his class or in the office, if my grandson had to be named Sivasubramanian!
An old story. When the convent principal, asked the name of my first son, me, raised my head, saluted my father silently, And told her, ‘Ananthanarayanan’
The old lady, fair like a faded white rose, her eyes like marbles, gazed at me and without saying a word, wrote on her book, ‘Ananth.’ With one stroke of a pen, the name of the God, the name of my grandfather, given to my son, ceremoniously, with ritual fervor, keeping him on my lap, communicated through his right year, where the holy Ganga flows, has been mercilessly, unceremoniously cut to less than half.
Why mourn ! Ananth also is God’s name.
What was exciting was the kid got LKG admission in a prestigious school, close to home, no donation, no capitation fee, no building fund!
Even such a shortened name is now twisted to a terrible shape by his Gym coach- Naanan!
It is fine. It is the short form of Narayanan!
My DIL, without asking me a word, added my wife’s name to her daughter’s and my name in a short and sweet form to her son. My wife’s name was already short and sweet. Mine became sweet when it was added to my grand son’s name.
My second son too followed suit. Now there are two
Ratna Perinkulams in the family.
We are selfish. We want our names to be in the air, even after we become a part of the air!