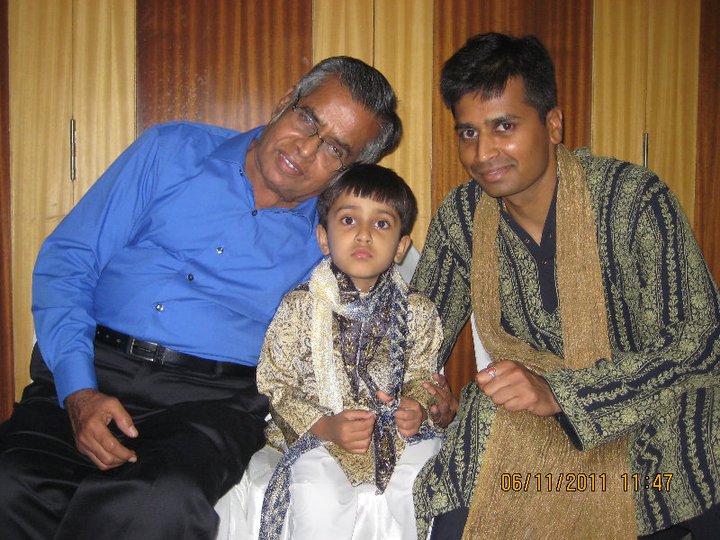 September 28, 2013.
40 years ago on this day was born my seemanthaputran, eldest son Ananth S perinkulam, giving fresh life for me and his mother whose period of gestation was under much stress and anxiety due to an alarm bell rung by a gynecology expert. Unable to contain my joy, seeing the 3.2 kg chubby child, crying with full throat and moving his limbs forcefully, I cried, ‘Kutta’ and later seeing his blooming face resembling the full moon of the sharath season, I named him Sharath. Now he is Peri for his friends, but that is another story.
Many events of Sharath’s childhood days pass through my mind. My sister who was with me then used to carry him followed by her husband carrying a small stick, to the preschool, as I could not stand him crying. When I took the kid to our Institute for giving vaccination, seeing my swollen eyes, my doctor colleague joked, ”why do you cry? the injection is not for you!”
Like his mother and unlike me, he talks only when he should and talks sensibly, sweetly and softly. Again like his mother and unlike me, he never lies even for fun, he dresses meticulously, never boasts or gossips, keeps his things in order and maintain an over all discipline in life. But like his dad, he is very considerate towards his siblings, cousins, aunts and uncles. And again like his dad, he doesn’t cross the Lakshmanrekha drawn by his wife, and that again is another story !
While his mother used to struggle in the kitchen to make food for a number of guests, I used to enquire, standing 20 yards away, whether I should help her. A honest man my son is, he doesn’t act that drama. He never goes anywhere near the kitchen to help his wife and she doesn’t grumble as I had warned her sufficiently  in advance. I am really proud that he can make his own coffee or tea , a good one, unlike me, when his wife is away and when there is no other way.
Again like me, he met the girl whom he was going to marry only on the previous day of their wedding.  But there was a minor difference. He saw her photo, corresponded and chatted before giving us the clearance for his nitchitartham. In my case, father performed  the nitchitahartham and sent a telegram, “your wedding is to take place on– at –. Come well in advance”
My ‘Oh, Parmasukham’ story, though a bit exaggerated, is all about that.  Anyway, that again is another story.
Sharath has acquired his grand pa’s qualities too. Appa used to spend  a few minutes every night , before going to bed with his aged mother and enquire how her day was and whether her needs and comforts were fully met . My son also does it . However tired he might be, he sits with me and enquire about my health, before he retires to sleep. My father used to explain to his aged mom, just to give her the importance of the head of the family, the income and expenditure statement of the daily business form the shop. Sharath stopped that practice when I questioned why he was not bargaining in  Walmarts, Patel shops, Pissa huts etc. ”Appa, that is not done here”, he clarified.  He might be right. Many things like bargaining or torn shirt or shoe- repairing, as we do there, in Hyderabad or Palakkad are not done here.
The husband and wife excels each other in their generosity in serving me. Someone had told Meghana, when she entered our house, that though I am well behaved, some of my inner parts, especially my pancreas, are not .  Recently my blood sugar lever shot up, as it often does and my children knew about it as they keep a constant watch on the working of my external and internal parts. As a dutiful daughter, Megh broke a laddu into 20 pieces and counted the number of golden little balls to be given to me. Even experts err and she, a Mathematics expert, erred. “Eight or nine, please count this once”, she took a second opinion from another Maths marathoner in the house, her hubby. ”It is OK, give Appa the entire thing. Appa loves sweet and be liberal”, advised my putrasikhamani as if he was generously permitting the release of  twenty Thirupathy laddus!
For the Aavani avittam there was a miracle here. The level of the payasam which Meghana had kept in the fridge, after giving me half a spoon, had gone low.  After returning from her college,  I heard her screaming, ” Appa, the payaasam level has gone down”. That is not a good news, especially if there is someone at home with misbehaving pancreas .
” Evaporation”, I replied casually, looking at the side wall, as if it was not a subject to be discussed at all. Single word replies, sometimes invite sarcasm .
” A science man telling this ?” She looked into my eyes, as if I told her something unbelievable.”Dad, I kept the payasam in the fridge and not in the oven!”
Single word won’t be sufficient to face such an onslaught. So, I had to elaborate.
”Megh, you could be right ; I am not aware of the latest progress in science. I left the science labs long ago, you see”
When I lifted my head after revealing a great truth, she was standing before me, her eyes glued to my face and mouth partially opened.
”You don’t believe my words, Megh?” I asked, innocence inundating every word .
”Whose words will I believe if not yours, dad?” she replied, sincerity sandwiching her words and action.”I am only wondering who corrected your science papers !”
Professional jealousy !
I wish my son a very happy birthday. May the God’s karunakataksham be always with him and his family.
Category: A12.01 About me, my family & friends

4 thoughts on “A father's musing on son's birthday”