NAGHABHARANAM
:
I am never tired of enjoying the beauty of the statues carved on the pillars  of the Ananthapadmanabha Swamy temple in the town which goes by His name. Every time I spend a few minutes before them I learn something new. Last week, I stood silently for a long time, before the great statue of Garuda, the divine mount of Mahavishnu, at the main entrance, facing the sanctum, with the statue of the same height, of Hanuman, the monkey king, to my left. These two magnificent representations of the non-human forms are installed there perhaps to remind the devotees, the two steps they have to cross before reaching the abode of the Purushothama, the Ultimate. Fly in the sky or jump from tree to tree but when you reach the abode of the Lord who mediates, reclined on a grand serpent, maintain absolute silence.
A stage comes in every one’s life, however fast and high he jumps or flies, when he has to cool down and go into silence.
I am looking at the statue of Garuda again. The Great bird is having an ‘odyanam’ a unique ornament around his hip – guess what it is? A serpent!
” The nagas or serpents have a special place in the Hindu tradition and they are worshiped in India and even is some countries outside, probably because, they are close to several gods. If Mahavishu is Nagasayana, Lord Shiva is naagabharana and  Mahaganapahty, Subrahmania  and Devi are serpent-jeweled .The snakes primarily represents rebirth, death and mortality and its periodical skin-shedding represent re-birth. It is said that snakes, by their appearance, symbolize the umbilical cord connecting the Mother Earth. Even the ‘Shakthi’ the prime energy, so say the learned, is dormant in the form of a kundalini serpent inside our body and when awakened it expands into a great force capable of performing fantastic feat. In Kerala, every temple has a mini shrine for Nagadevathas and in fact every house there had a shrine at their backyard where daily worship was performed. In some places, there are exclusive temples for the Nagaraja. The Ananthapadamnabha in Thiruvanthapuram reclines on the great Anantha, the serpent king ” 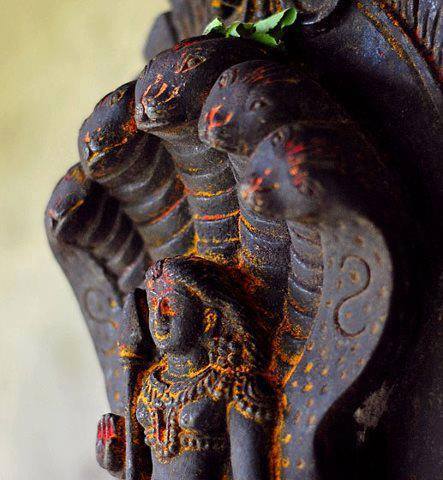 As per the legends, Lord Subramania after killing the asura  Soorapadman converted his body into two portions and made them an integral part of Him, one as peacock,  his mount and  and the other as cock decorating his flag. Every devotee longs for a new dawn in his life. The cock proclaims that. Every devotee aspires for a lovely, peaceful, colorful life. The peacock assures that.
I am looking again at the serpent-jeweled waist of Garuda.
Is not this an admirable Idea – Punish the powerful enemy for his devilish acts and later valuing his valor, grace him by adorning him on the body ?
Similarly can I get rid of my ego and similar other undesirable qualities and then with a fresh mind live ever as an ornament or mount or flag-decoration of the Ultimate?  The problem is that I do not want to annihilate my unwanted qualities which give some imaginary pleasure. The result is they accumulate, compress the mind and obstruct the entry of good qualities. They block the passage of fresh air. They choke. But that may not be forever. Often, a torrent of divine mercy gushes in high speed and cleanses the accumulated trash.
As a child, I used to watch with awe a tall figure, poonal hanging from his hairy chest, walking across the streets of Kalpathy, raising his right hand and shouting mostly nonsense, often abusing the national leaders. He was Kallukudiyan Krishna Iyer, a vagabond, often in a boozed state, had no family (that was what we all thought) or any other worldly possession . He used to survive on the neivedyam provided by Pattali, the temple priest and some petty amount parted by the kind village folks or the train passengers who move through the village.
On my side of the Kalpathy River, there was a Karukappilai Nadar a close friend of Krishna Iyer. Nadar’s given name was Kamaraju. His habit of stealthy collection of Karukappilai during night hours from the trees in the neighborhood and trying to sell the product to the owner of the same trees, earned him the title of karukappilai. The bosom friends became arch enemies on some silly issues and were not talking to each other for years together.
Krishna Iyer fell sick and some good soul admitted him in the hospital.  Karukappilai, knowing that his old friend’s end was nearing, went to meet and console him, forgetting the enmity.
“Iyyare nee pozhakka maatte- You will not survive, I am sure”  Karukappilai commented in a language familiar to his old friend.” On kadasi viruppam enna sollu-tell me, what is your last wish “People of my previous generation, especially those with little education were blunt in their talk, they said what they meant and there was no scope for misunderstanding. Words came forth without undergoing any brushing or polishing.
”Karuku, I have nothing to lose in death, nor the death has anything to gain by accepting me” Iyer, murmured holding his friend’s hand. “ I want you to fulfill my last wish. I have a son born to a Malayalee woman, growing up in the Pudiyangham tharai-village. ‘Tharkathu’ is the house name. I deserted him when he was hardly six months old and I am sure that his mother too would not have mentioned to him about me. I want him alone to do my last rites on the bank of the Kalpathy river.” Krishna Iyer, picked up a bundle of currency notes and an old photograph of his, in full suit and turban, taken several decades ago and handing them over to his friend he continued in broken voice and swollen eyes, ” tell his mother that I never touched another woman. My only bad habit is that I drink a lot and once I drink uncontrollably I think only her and my kid whom I left for ever and went to North for earning my bread. And tell my son that if he places a rice ball on the river bed, throw some water mingled with thil seeds over that and clap his hands shouting ‘ka,ka,ka, I will rush flying from where ever I will be then, like this, like this–” Iyer tried to move his semi-paralyzed long hands to exhibit how he will flap his wings and fly to pick up the rice fall. When he mimicked the crow, eagerly and expeditiously arriving from the distant sky to accept the rice ball offered by his son, Krishna Iyer’s face brightened, and eyes became moist, hairs and ear lobes stood erect and head tried to move as if he was visualizing a great event.
Then that flame slowly and surely went off.
Karuku sat in a corner of the hospital ward and wept inconsolably keeping his head pushed between his legs. Then suddenly he got up, picked up a handful of holy ash from a cloth bag from his shirt pocket, dipped it in the water available in a basin and applied that double filtered, scented viboothy from Pazhani all over Iyer’s body, on his forehead, chest,belly, hands, legs everywhere, shouting ‘Muruga, Muruga, Muruga ‘. Then he rushed out without looking at the body smeared all over with holy ash, shouting “’po Iyerea, po. Murugan onnai ethukkindan”-The Lord Subrahmania has accepted you. With no more familiar foul smell of country liquor emanating, Iyer’s body lay on the hospital bed spreading fragrance of Pazhani viboothy.
I do not know whether krishna Iyer’s son offered him rice ball or not but while returning from the school, I used to look for that familiar figure , in the form of a crow , amidst scores of birds who used to gather on the rocks of the river bank.
Now, after all these years, while standing before the Nagabarana-Garuda, I earnestly hope that Krishna Iyer’s memory would have become a garland in the minds of his wife and son whom he rejected but did not forget even under the influence of liquor. .