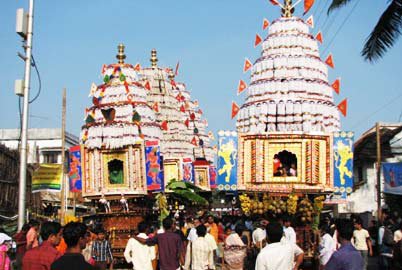 No sooner I landed at the place of my birth to participate in the annual car festival this year, after an unpardonable gap of many years, than I rushed to the river for a dip, before visiting the recently renovated temple of Viswanathaswamy to offer prayers. I am familiar with the moods of the Kalpathy river, having spent several pleasant evenings on its bank, idly lying on the sand- bed gazing at the setting sun or at the silvery clouds descending from the neighboring mountains. Mostly, she flows silently, sandwiched between two rocky ranges, like a newly wedded, shy and slender girl escorted by her in laws .

Gazing at the scenic beauty of the western ghats, the falling leaves from the huge tree on the bank and the chirping birds on it, I sit for a while on the granite steps descending from the backyard of the temple .

The time clock gets pushed back by several years.

While performing the avaniavittam ritual seated on these steps amidst hundreds of Brahmins, I repeat verbatim, the sonorous sounds of vaadhyar Chuppamani, who stands like a statue ahead, bright white threads and vibhooti marks crisscrossing his ebony -black frame. For a while, surreptitiously, I glance at the bathing beauties nearby and get caught by his watchful eyes. Unwilling to interrupt the flow of mantras which is inevitable if he scolds, he stares at me and produces a ‘mmm’ sound. I repeat that sound too under the impression that it was also a part of the mantra stream. Vaadhyar breaks into laughter unmindful of disruption to the recitation.

It is this river and its scenic surroundings that gave wings to my short-lived poetic fantasy. It is the waters of this river which carried the ashes of my mother which I emptied from an earthen urn reverently and it is the big banyan tree here around which many of childhood fears and fantasies hang . Did I say an earthen urn ? Yes, I did. How cruel I am ! A mother’s love, hope, aspiration, pain, smile, laughter, woe, worry, affectionate hug, kiss, scold, scream everything, everything pushed into an empty earthen pot and I emptied that pot pouring into the flowing waters ! And those waters which embraced her many mornings and evenings in her childhood, accepted the ashes without a murmur and carried them away as if carrying a handful of dry flowers and tulasi leaves thrown from the corridor of the temple above !
I have a close relationship with this river, as close as to that of a childhood girl- friend. Much later, even while acquainting with more attractive and sophisticated damsels like Thames and Seine , this innocent village girl with sparkling smile, used to peep from a corner of the mind.

My mind transforms into a melody at the presence of my childhood and juvenile companion. In kasi, philosophy and mythology takes over its control. The vast expanse of the Ganges in the front, the burning ghat at my back, the scintillating ‘harati’ at dusk -and many more such scenes and incidents evoke an illusion that I am in a supernatural sphere moving to the land of unknown. With kalpathy, it is a down to earth feeling. The homely temple and friendly river, the sweet girls in pavada and elderly women in six or nine yards saris, the bare- chested brahmins holding a packet of darbai or an umbrella, the children going to school carrying their books, the small tea, fruit, flower and provision stores, a lonely bull freely moving about, the overflowing music from the ‘koodams’, living rooms of the roof to roof houses – all these are homely .
The sonorous chendamelam wakes me up from my reverie and I proceed towards the temple. The recent renovation, without hampering the originality has given a face lift to the temple which looks cleaner and spacious. The deity, the same old Viswanathar, appear as simple as he was during my childhood, though his divine consort Visalakshy Amman looks much younger. I felt as if I was standing before my parents when I go home for vacation, my father seated on the thinnai of our Olavakkode house with white vibhooti lines prominently displayed on his broad chest, long hands and other parts of the body and mother humbly beside him with a tumbler of coffee in her hand.

My meeting the divine family was purely a family reunion. It was more affection and respect rather than bakthi or devotion that ruled my mind during our meeting. In fact it is so in most of the Kerala temples. You are at home with an elder to whom you can open up your heart and ask for a help.

In fact, the Kalpathy car festival itself is a family affair, the grand divine family coming out to meet the families of the mortals. You should see the enthusiasm of the crowd waiting on the street outside the temple, when the idols of the Viswanathaswamy, Visalakshi Amman, Ganpathy and Subramania swamy appear on the surface, carried up by the devotees through the flight from the ‘kuntambalam’ . The head of the family along with his consort mounts a chariot, as it should be and then, the juniors on their respective ones.

It is a pleasure to watch the divine procession in half a dozen colorful chariots,beautifully decorated with flowers, flags, sugarcane, coconuts and plantain bunches, ceremoniously drawn through the streets by thousands of devotees, accompanied by caparisoned elephants and percussion. While the learned Brahmins chant Vedic hymns rhythmically, the devotees irrespective of caste or creed close their eyes in silent prayers and pull reverently the thick coir ropes , an act which is believed to remove the accumulated sins.. The pachyderms, by moving their trunk, tail and ears enthusiastically exhibit their exhilaration at the roaring but synchronized chenda melam.

The broad roads which would have allowed easy movement of two bullock carts from opposite direction in the olden days now facilitates the ceremonial rolling of colorfully decorated chariots surrounded by enthusiastic crowd . Two rows of identical houses on both sides with slopping tiled roofs and a pair of shining small ‘thinnais’ or sit outs at the entrance on both sides of the steps, relaid and polished recently by the state Government under the Parental Heritage scheme, provide a distinct architectural alignment.

This is a fantastic scene -the assembly of six charismatic chariots, after visiting the villages, followed by elephants, surrounded by enthusiastic crowd when the setting sun envelopes the sky with a vast crimson coverage or shamiana. All the deities including the Lakshmynarayana perumal with his consort and the Mahaganapthies from Chathappuram and New kalpathy are together with the Viswanathar family now. After other formalities, they take leave of the grand sire and withdraw to their own places, to return next year.

Dear Sir,
I am  born and brought up in Mumbai and my wife is from Trivandrum. All along I have been working abroad but
on every opportunity I have visited Kerala.
Just today I went through ur article on Kalpathy car festival and while reading the mail I was just carried away all the way
to Kalpathy from Philippine where I am at present. My father hails from N Parur and mother from Alleppey.
I am of the opinion that only the blessed children of GOD are born in Kerala in a Brahmin Family.
My last wish is to have a room in any BRAHMIN  AGRAHARAM in PALAGHAT ,go to the temple at 4am, go into deep meditation in the temple,have Idli for the breakfast with Kattan Kappi everyday, read HINDU, have a afternoon nap, some pakodam or omapodi or muthusaram with tea in the evenings, again have a darshan of the Almighty in the temple, have Kanji and then retire for the day by 9pm.
No doubt  its a dream to be fulfilled
and some more last wishes
ANAYASANE  MARANAM
EKADESHI MARANAM AND DWADESHI DHANAM
Sir please keep writing and I enjoy it very much .
Blessed are ur children ,grandchildren,SIL and DIL
who are fortunate to be with you all the time listening  to your experiences, teachings,,reading ur writings and last but not the least have the opportunity to SERVE YOU WITH ALL THE DEVOTION.
MY NAMASKARAMS TO YOU MAMA.
regards
A5 Ramani
——————————————————————————————————————
A fine write-up sir. I was immediately transported to Kalpathy by reading this. Thank you
With warm regards,
Pradeep
Category: A07 — PRADAKSHINAM TEMPLE VISITS