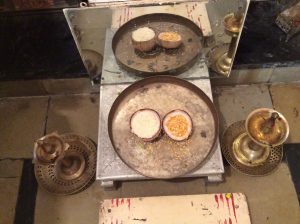 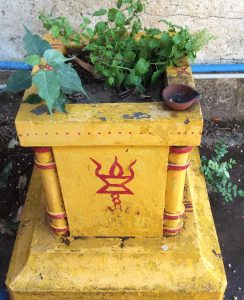 Filling the  Vishukkani coconut halves with rice and tuwardal, was a ‘thekkan sampradayam’ practice in the southern part of Kerala introduced by my wife. She used to keep a small stick of turmeric too, which I didn’t do for the simple reason that there is not a single one at home at present. There was a time when they were available in plenty as it was a part of thamboolam given to married women when they used to visit us. Nowadays, no married or unmarried women visit us, except my Meenasister who brings some food items often. Another sister is not in Hyderabad and I’m waiting with my Vishukaineetam for her, when  she is expected back from USA soon.

Last year, there were a few turmeric plants in my tulsimadam, and the green little ones were helpful to me for my Sankranthi offer of Pongal to Sun God, which I used to perform in the open area, before my house. Now, in their place an alamaram, peepul tree is coming up. At the foot of the abode for tulsi, a kariapaakku or curry leaves plant is coming up. Both have chosen wrong places or without their knowledge and permission, they were destined to be born there. It happens in the case of humans too. Some are born in the wombs not meant for them, but they get adjusted while growing. I had a brilliant colleague, a Scientist, who told me that his dad was a drunkard and when he was a kid, threw him into a ditch, while not in his senses. The boy survived the calamity, grew to gain a doctorate in Science.  The soil of birth is an important part in the growth but in some cases trees do grow well and reach the sky, due to other factors.

I’m not comfortable to disturb the plants who have taken refuge in my tulsimadam, but what is the alternative ?

Nowadays, boys and girls, who dislike their connecting link, break the link easily and seek other links. No problem .

The world is full of thamasha for others but not so for those involved. Some silently suffer; some seek refuge in the Facebook or mobile phones😝

Hara,Haro, Hara! Some go to Pazhani or Tirupati and get their head shaved off. One of my friends, a graduate in engineering, who hasn’t got a job despite trying for the past 6 months was seen his head shaved off yesterday.

‘Manjipani chesiyavu’, I told him. U did a good job

‘How did you know that I went to Tirupathi?’

I’m not surprised that he didn’t find a job! An young Telugu man standing before me, one fine morning, with completely shaven head asking me, ‘how I knew that he had been to Tirupati😭?

I’m sure Govinda will get him a good job.