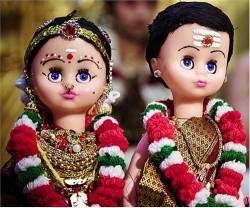 This picture brings to my memory two stories, I have heard about the childhood weddings of olden days.
Two brothers were getting married on the same day. The girls were below ten and boys older only by a few years. While the couples turned the street corner holding hands, on their way to the nearby temple, an old man, raised his eyes to get a clear view of the pairs under the dim street lights and quipped, ‘ah, ithu eppo nadannu, ee all maattam- ah, when did happen this exchange of brides?’
They were holding wrong hands!
Another story, after about 15/20 years .
The bride’s party waited till the last boat arrived on the wedding eve, but no trace of the bridegroom’s party-( boat was the only transport available ). They were worried. The village elder said, ‘wait till tomorrow morning. Even if they land just five minutes before the Muhoortham, we will perform the wedding’
No luck, next morning too. No trace of the bridegroom’s group in the morning boats too. One, two, three boats have landed. Time was flying. Once the Muhoortham time lapses, nothing could be done for another six months as that was the last muhoortham in that season.
A thick curtain of gloom landed on the wedding venue. All arrangements made elaborately for the 5- days wedding was going waste. Everyone was depressed. A few women wiped off their tears; Men looked into the kitchen to confirm that the breakfast was already prepared, so that they could at least have one meal and disperse. But, there came an announcement by the family head: ‘Request no one to leave the venue without having breakfast and lunch,’ ‘We will stay back, if you desires so,’ replied a guest who was not in a hurry to go.
The village head ignored all the comments and called a tall boy with fair skin, broad chest and a smart look, who was moving a big vessel into the kitchen, lifting it all alone. He was strong, well built. Had a pleasing look too.
‘Venkitachalam, come here’ . That was only a request though it appeared like a command. “You are 16 plus and therefore over aged for marriage. You are selected as a constable and therefore a girl’s father will think twice before asking your father for your horoscope. Paru is dark complexioned, short in size, but she will make an excellent wife and take care of you so well that, to some extend she will fill the gap of your mother and father, who are not alive”
The boy hesitated. ” Let us wait for the next boat”
“The Muhoortham can’t wait,” the old man said, ‘say yes or no. The decision is yours”
He nodded his head. The wedding, in a grand scale, went on for five days.
The couple lived happily for several years. The wife was a wonderful support to him, to their relatives and for the whole village. The husband, did have a dormant feeling that she was not a match for him. By nature of his job, he was rude to everyone even to his wife, but was honest to his wife to the core, though he was telling his friends, intentionally or jokingly that in his next birth he expected to have a good looking wife.
She didn’t take it seriously as she was well aware of the disparity in their appearance.
They went to Rameswaram and while taking dip in the sea, he held her hand and said, ‘Paru, pray that in the next 21 births, you and you alone should be my life partner’.