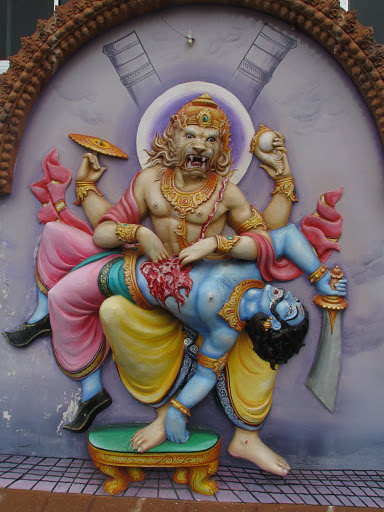 Whenever I see the fantastic, unique, human-lion combined form of Narasimha Moorthy in a shrine I close my eyes not with fear but with awe and admiration, devotion and love (yes love! ) and sing loudly if none is there in the audible distance , Annamayya’s Attana ” Kadiri Nrismhudu ” * or simply look at the idol, speechless,  and admire its beauty . But when I am back home and muse on the story of Narasimha avatar , I feel pain in a corner of my heart, due to a query – Why did the Lord kill Hiranyakasipu so mercilessly , in the presence of his son and wife?  The demon king deserves punishment for his cruel treatment of his son and many others but could he not have been punished in a less ferocious manner? Tearing the chest pulling out the intestine – I do not know whether the Lord really did so but that is how many of the pictures exhibit the act . But then, the Lord was in his Narasimha avatar, half-lion and half- human . Tearing a body with its sharp claws is Lion’s nature . It does not use a sword or arrow to pierce enemy’s chest ! Though I appreciate the narration God’s ferocity against evil forces to be eliminated , some of the visual depictions of the same are repulsive. A kathakaali show for example, pulling out twisted cotton ropes dipped in red ink from the body and wearing them around the neck with screaming . How artistically the message could have been conveyed by action alone !
Of the ten avatars, Narasimha avatar is the most instant manifestation of the Divine force , which did not wait for a minute when His child devotee’s unalloyed belief in the God was questioned by his own father who firmly believed that he was the best, strongest and most powerful in the universe, none other in the world and even the gods were subservient to him. Prahlaada not only refused to accept his father’s claim but also expressed openly his trust in his father’s arch enemy, Mahavishnu. Even a normal father will not tolerate such arrogance. Prahlada was perhaps the first child to declare total disagreement with his father and to revolt against him. To revolt against the most fearsome, uncompromisingly arrogant cruel father, one needs guts. Prahalad had it . His courage of conviction was unique. And he revolted at a time when father was allotted a honorable second place and God only the fourth and the last in the list of elders to be revered ! -” Matha, pitha, Guru, Deivam ” And think of the plight of Hiranyakasipu’s wife. The poor woman had to witness almost every day the cruelty of her husband towards their own child ? How can a Hindu wife revolt against her husband and how to go against the wisher of her son ? For Hiranyakasipu too it would not have been a wholesome pleasure to cruelly punish his won son, His ego and false prestige overtook his sense of attachment. And what about the God Himself ? It would have been impossible for him to take the life of his enemy in the presence of his son and wife. In a human form he would not have done what he had to do . That was why He manifested in the form of a half human and half animal , the most cruel one.
Now let us pray to the Kadiri Narasimha. Kadiri is a small town in Ananthapur district, Andrapradesh where there is a Lakshmi Narasimha swamy temple . The Lord here is believed to have emerged out from the roots of Kadiri tree and it is said that while doing the daily abishekam for the deity , water droplets trickles out continuously as they are wiped off. “According to the legends of the temple, after exterminating Hiranyakashipu, Lord Narasimha, pacified by the prayers of His devotee Prahalad, shuns his frightening form and appears in a protecting form. Thus, the deity at Kadiri symbolizes this transformational phase of the Lord “
Annamacharya has greatly succeeded in bringing out the ferocity of the presiding deity in the song given below,soaked in bakthi.
Raagam Sudhasaveri-  Adi thalam
Pallavi:
‘Kadiri Nrisimhudu kambhamuna vedale
Vidhidha mukha sevimparo munulu
( Kadiri )
Charanam 1
Phalalochanamu bayadogra mukhamu
Jwalamaya kesaramulunu
Khala rowdra samkhaditha damdhamulu
Helapathi dhariyenchaga niliche.
( Kadiri )
Charanam 2
Mudivadu bommalu munchina noodpulu
Gadagada nadaredi karamulunu
Nidutha naalikayu nippu karanamulu
Nadiyalaku roopai velase
( Kadiri )
Charanam 3
Sakalaayudahamulu sahasra bujamulu
Vikatanekhaambulu vedabooni
Vekaliya guchu Sree Venkateswarudu
Prakatapu dushtula bathinchnithivo .
( Kadiri )
‘ Narasimha mamava bagavan nithyam ‘ is a composition in Aarabhi by Swathy thirunal .
———————————————————————————————————————————-
Beautiful siva to read this in the morning, many a time i have also wondered why he had to be so ferocious but then sometime i feel let me also be the victim then that way i may also find moksha from this cycle of world….
with kind regards
sundari kannan
————————————————————————————————————————————–
Second part

> Encouraged by the response from some of the learned members to my previous post, I have pleasure to continue sharing my contemplation on Narasimha avataram,the most instant manifestation of the Divine force of Mahavishnu and the first in the development towards human from animal form.
>
> Many years ago, as a bachelor, I was living in a spacious house initially with four friends and then alone, when my sister Raji joined me for a short sojourn. A severe typhoid fever damaged her lever which became cirrhotic and she coughed out a large quantity of blood and swooned. It was midnight in a bone-twisting cold December, the lights went off, no candle was traceable and I had no telephone connection to call friends for help and did not want to leave the girl in a semi-conscious state alone, amidst the pool of blood on the floor and go out and disturb friends enjoying deep sleep in the deadly winter night.
>
> When such a calamity of unfathomable magnitude struck me, without knowing what to do or where to go, instantly I lifted my hands towards the heaven and cried for help from Lord Lakshmi Narasimha swamy of Yadagirigutta whom my local friends used to worship as ‘vaidya Narasimha’ – the God who heals. .
>
> “ Lakshmeepathea, Kamalanabha, Suresa, Vishno,
> Yagnesa, Yagna, Madhusoodhana, Viswaroopa!
> Brahamania, Kesava, Janrdahana, Vasudeva,
> Lakshmee Nrisimha mamdehi karaavalambham.
>
> Eakena chakra maparena karena samkham
> Anyena Sindhuthanayaam avalambhia thishtan
> Vaametharena vardabhaya padmachinnam
> Lakshmee Nrisimha mamdehi karaavalambham “
> 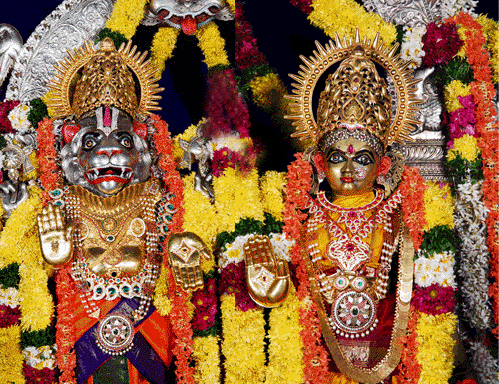 Comments:Namaskaram
I am very much moved reading your sharing about Narasimha Swami. Though I know about the avatar I am introduced to the Annamacharya kriti only now. Thanks for the same. Usha

Category: A05 -- THOUGHTS ON RELIGIOUS AND SPIRITUAL ISSUES