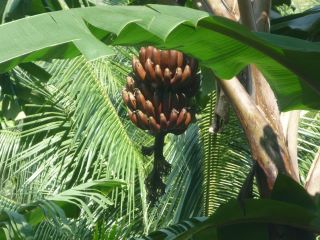 A human form was there under a chenkathali vazha, a type of plantain.!

” I could learn many things about you in two hours, Appu chetta ” Ammu boasted, unconcealed happiness flashing as a benign smile on her face, while entering the gate of our house.

” You didn’t say a word about your parents though you talked a lot ” I chuckled, ” you are an expert in talking for hours, without saying anything”

” All girls are like that except Ratnam chetchi ” Ammu continued without allowing her smile to fade, ” she manages to say, what she wants to,  by her silence. My parents are here and I will introduce them tomorrow.”

” I will introduce them ” Lalitha who came out of her room hearing our voice, intervened. ”No need Lalitha” Appa, who too came out asked her to go back to sleep and then sent Ammu  too o to her room. Looking at me and pointing to wards a side room, he  hummed, “oom’ . That sound was to reveal his disagreement for taking Ammu out, at the wrong hours.

The snoring of Chami pattar welcomed me when I entered the bed room allotted to me. A bad room mate no doubt. His AADS-automatic air dispelling system was extremely efficient  His snoring was elaborate and thunderous, thought rhythmic at times. His yawning voluminous, vociferous and volatile.

I leave to your imagination the efficiency of the third AADS !

Sleep evaded me.The sweet memory of my  sojourn at Trichur was humming in my mind, in contrast to the noise in the room.The sharodies lived a simple but rich life.They had little assets but each member of their family was an asset to others and the family as a whole was an asset to the society they lived in. They knew little science and commerce but their common sense was admirable . I never felt that I was away from my own home while I was in the sharam. Sitting before the nilavailakku ( ornamental brass lamp ) they used to recite ‘Adyathmaramayanam’ or Harinamakeerthanams ( devotional compositions in Malayalam language,at dusk, and I used to join them in their prayers, despite Ammau’s mischief and deviation tactics.

I could neither sleep nor even stay in that room. I came out and scanned the surrounding, to ensure that my father had gone to sleep. Lalitha also had gone to sleep. I wished she hadn’t. She enjoyed my pranks, though outwardly she showed dislike for them. I have some readers like her. They contest every word of mine, but will quote volumes of what I said .Some couple are also like that. When together, they behave like ‘pampu and keeri ‘ snake and mongoose and if she goes to he her mother’s house for a day, the telephone bill for that one day? Oh, how funny and complicated is the pairing problem ! I know one couple. The wife was a symbol of compassion, elegance, friendly submissive and sweet talking. Nothing much to say about her looks. She was short, stout and dark-skinned.

Her husband was a charming six-footer, fair complexioned but arrogant and authoritative and abusive in his expression to every one especially to his wife. He was an efficient police constable, fit only for that job,.Mostly he used to be on patrol duty but whenever he came home, he quarreled with his wife. But, soon after the Amavasya night, the moon has to rise. It did rise in the womb of that good woman .

Some elderly women were drawing ‘kolam’ and the cooks, under the supervision of my uncle, were boiling water and cutting vegetable. It was a pournami, full moon night. I could not ask for more. My aspiration to enjoy every drop of nectar falling from the divine sky, fully brightened by moon and stars was uncontrollable. Ah what a feast is going on in the great hall of heaven. Like a squirrel, hiding behind a tree, I am here in the corner of a house, when a glamorous festival procession is moving in the sky! Let my dad scold me or do whatever he wants to . Gathering courage, I came to the garden. It was full of plantain and mango trees . A human form was there under a chenkathali vazha, a type  of  plantain.! It took some time for me to know who that was.

It was Sharada teacher! Her white sari, white hairs and fair complexion stood in the way of my instant recognition, under the expansive moon light. Teacher, all alone, at this hour ! She was sitting in meditation, closing her eyes, completely unaware of the surroundings . I went near her, sat close and recited Kalidasa’s famous stanza from Kumarasambhavam, describing Siva’s penance under the Devadaru.The Lord was sitting absolutely motionless with complete control of ‘pranas’, vital breaths, not allowing them to move in any direction, upwards, downwards or sideways.


This is one of the six slokams in ‘Kumarasambhavam’ where the great master describes Siva, in great meditation, to a cloud full of water but not in a hurry to shed rains, a sea, devoid of waves and a non flickering lamp in an-air free space.


That last line, ‘Nivatha,nishkampa miva pradeepam’ will be on the lips of every Sanskrit lover!
If your sweet other half is a lover of Kalidasa, you would have heard this sweet line from her sweet tongue every time you sit immersed in your news paper when she struggles to get the  children ready for school,  in the busy morning hours.!